Two recent conversations with Dr. Olivia J. Hooker reveals her steadfast commitment to a lifelong passion of helping others through the field of psychology
Cite this
Cautin, R. L. (2012, April). The indomitable Dr. Olivia Hooker. The General Psychologist. https://www.apadivisions.org/division-1/publications/newsletters/general/2012/04/olivia-hooker 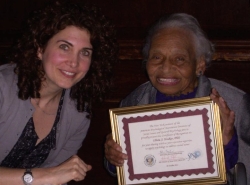 Division 1 recently co-sponsored an event that featured the psychologist and social activist Dr. Olivia J. Hooker, PhD At 97 years of age, Dr. Hooker described and reflected on her varied personal and professional experiences: as a young girl in Tulsa, Oklahoma during the Tulsa Race Riots of 1921, considered the most violent of all race riots in US history; as the first African-American woman to be enlisted in the US Coast Guard; as a school psychologist who worked in a variety of settings, including the Albion Correctional Facility, the Kennedy Child Study Center, and the Fred Keller School; and, as a psychology professor at Fordham University for 22 years (1963-1985).

Held at Manhattanville College in Purchase, NY, this recent event was inspired by the August 2011 interview of Dr. Hooker by psychologist-historian Dr. Alexandra Rutherford of York University, part of the APA's History Division program at the APA Convention in Washington, D.C.

Prompted by Dr. Rutherford, Dr. Hooker described to the APA audience what it was like for her and her family living in Greenwood, a section of Tulsa. "It was a very good life in those days because the businessmen of the Greenwood had everything that the population of black people needed; we did not have to go downtown for anything, except the bank...so, we were very satisfied, and our egos were very strong because we had not been persecuted."

Dr. Hooker recalled the beginning of the riots "I was six years old when the riot came, but I had been in school for two years (at a little private school down the street) and so I could read, and I thought that everything in the Constitution pertained to me. I didn't find out until that day - on the 31st of May - that I was left out. And I didn't find that out until the riot had been going...I heard bullets on the roof and I said to my mother, 'How can it be hailing when the sun is shining?' and she said, 'Come with me'. She took me out from under the old oak table and took me to the window and looked through the blinds and she said, 'Look upon the hill...do you see that thing?' I said, 'Yes,' She said, 'That's a machine gun. You see the American flag on top of the gun?' I said, 'Yes.' She said, 'That means your country is shooting at you.'"

Dr. Rutherford inquired about the effects of the riots on Dr. Hooker and her family. During the shooting, Dr. Hooker explained, her mother insisted on carrying on as she would have, so she put the children under the table and proceeded the prepare breakfast. "But when the mob came in," she recalled, "they got angry because she didn't run and she had the nerve to be cooking breakfast. So the first thing they did was to take my mother's pots with the cream of wheat and applesauce, whatever she had on the stove...they took it out and dumped it in the dirt...Then they came back and they opened the oven and the beautiful brown flaky biscuits, they took that out and stomped it in the dust. And then they came back and poured oil on my grandmother's bed; they didn't set fire because they were in there, but they fixed it for a later fire."

She described her father's persistent, although in the end futile efforts over the course of seven years, to sue the insurance company, which refused to compensate them for the damage. Most recently, in 1997, one hundred four survivors of the Tulsa Race Riots, including Dr. Hooker, had initiated a class action suit, but the Supreme Court refused to hear the case. Dr. Hooker regretted that there was no recourse in the courts, but she characteristically offered cause for hope: "If we could stir up the conscience of America and they would all write to their legislators, it could be done by Congress if they chose."

Moved by the Hooker/Rutherford interview at APA in August 2011, a few members of APA Divisions 1 (General), 9 (Social Issues), and 26 (History), along with the support of the host institution, Manhattanville College, arranged for another opportunity to listen to Dr. Hooker describe and reflect upon her remarkable life. On October 20, 2011 at 7 PM, over 100 Manhattanville College students, joined by members of the community and by members of Divisions 1, 9, and 26 of the APA, filled the Ophir Room in Reid Hall to listen to Dr. Olivia Hooker.

As she did in August, Dr. Hooker recounted her experiences during the Tulsa Race Riots and its aftermath. After finishing college at Ohio State University during the Depression, she landed a job as a schoolteacher; she shared with the Manhattanville audience some of the challenges of these early experiences. She also recalled the many children who would be referred for special education "because they didn't sit still"; but, as Dr. Hooker insisted, "Children can learn when they're moving". She described, for example, the "impossible" child who was simply inquisitive and persistent. Her remarks about this work stressed the importance of proper evaluations for children, lest they be mischaracterized and ultimately misplaced, thus "depriving the world of their contributions". Dr. Hooker worked tirelessly with parents and school administrators to do right by scores of children she assisted in her work as a schoolteacher, and later as a school psychologist.

In addition to recounting memories of the Tulsa Race Riots and her early years as a schoolteacher, Dr. Hooker discussed becoming the first African-American woman to enlist in the United States Coast Guard. Although she had been thoroughly enjoying her work as a schoolteacher, she explained, "We had worked so hard to get the Navy to agree to have Black women in the Navy. [...]So I thought if I joined [the Coast Guard] and if I lived, maybe some other people will come."She further recalled, "They called us SPARS," based on the Coast Guard's motto, Semper Paratus, meaning, "always ready", and she was sent to Manhattan Beach in Brooklyn, NY for basic training.

After the service, Dr. Hooker earned her Master's Degree in psychology from Teacher's College, Columbia University. She earned her doctorate in clinical psychology at the University of Rochester.

Olivia Hooker, PhD For her capacity to overcome adversity through her contributions to psychology and social justice. As a survivor of the Tulsa Race Riots of 1921, Dr. Hooker learned at an early age to turn adversity into opportunity and to use her many gifts and talents in service to others. She was the first African American woman to go on active duty in the United States Coast Guard and among the first group of women to obtain a PhD from the University of Rochester in clinical psychology. She has dedicated herself to the acceptance and understanding of developmental disabilities. She was one of the founders of APA's Division 33, Intellectual and Developmental Disabilities, and served as an early director of the Kennedy Child Study Center in New York City. As a faculty member at Fordham University, she mentored many students and shaped their professional lives.

A model of resiliency and courage, Dr. Hooker helped to found the Tulsa Race Riot Commission. She has worked tirelessly to ensure that victims of racism and violence are not forgotten. Throughout her life Dr. Olivia Hooker has served the cause of social justice and done so with grace and humility. True to the mission of the American Psychological Association she has embodied the principle of promoting human welfare.

For more on Dr. Olivia Hooker, see:
MacKay, J. (2011, Fall). Embodying the principle of promoting human welfare: The life of Olivia Hooker (b. 1915). The Feminist Psychologist.