Rise… looking up with exemplars in psychology
Cite this
Trotman, A. M. (2016, October). Editor's note. The General Psychologist. https://www.apadivisions.org/division-1/publications/newsletters/general/2016/10/looking-up

This is my penultimate issue as newsletter editor of The General Psychologist, and since May of this year, there have been many events in the United States and abroad that have caused me to pause: First the shootings in Orlando, Dallas, Minnesota and elsewhere, then sexual assaults and rape culture coming into focus, and undoubtedly, the presidential election. Being a member of Div. 1, which stresses connections among psychology's subdisciplines, I had little tolerance for viewing any of these events in isolation. Symptoms of issues of an insidious nature were emerging that communicated low levels of compassion, patience and education. And without these values, there was no other direction left for me but to go back up. I witnessed these ascensions through two scholars who both lived past the noble age of 100.

First, Jerome Bruner, who died on June 5. His memorial service held on Sept. 9, was hosted by one of his alumni students, Howard Gardner, and his colleague, Trevor Morrison. Bruner's portrayal was of a Renaissance man who delved in the scholarly areas of cognitive, developmental, educational and legal psychology, and language development. His relative, Howard Bruner Schaffer, stated that the Harvard faculty described Bruner as a wunderkind, and I believe that his prodigious talent to make connections among diverse disciplines was cultivated as a product of his love for the arts. Jerry, as he was fondly called, was an avid learner and he reminds us in his seminal book “The Process of Education” that interest in learning must be vigorously reinforced by emphasizing the underlying detail of the chosen discipline (e.g. science) and discussing how that detail can be expressed in other disciplines (mathematics, theater, arts, music and the humanities). The student who now has this foundational detail in his/her own discipline can invent these expressions on his/her own. This uniqueness may serve a role reducing apathy, as purposefulness becomes valuable on one hand, and competitiveness is curbed, as comparison becomes counterproductive on the other.

As much as Jerry learned, he was a beloved teacher among his family, students and colleagues. His grandchildren recounted him as the “last living grandparent” whose library was lined with all types of books, and he provided them with gifts that they still possess because they hold a deeper purpose with lasting impact. Caitlin Bruner then read one of Jerry's favorite poems “Death is Nothing At All” by Henry Scott-Holland and this was followed by one of his favorite classical compositions by Gabriel Fauré. The interlude closed with a song “A Thousand Winds” adapted and sung by his friend Margot Fox.

Jerry's student José Luis Linaza Iglesias whom he met in Spain in 1974, remembers him as a teacher who went beyond theses into arts, politics, science and even cooking. The learning community he fostered had doctoral students from many disciplines and countries, and there was an insistence on “we” where diligence in discussing topics of psychology, identity and culture was observed as much as eating meals and singing together. His other student Patricia Greenfield conveyed that her teacher's experience having his sight restored after cataract operations at the age of two, ushered his awareness of how people form concepts in the 1940s and 50s, which sparked his success in cognitive psychology. He recognized in the 1960s that the human capacity for cognition was far beyond what a computer can model, and the unbridled zeal that technology was the answer to all problems was antithetical to his humanistic perspective. His convictions actually inspired the creation of icons by its inventor, David Canfield Smith. And in the 1980s, Jerry felt that narrative (not logic) was the universal mode of thought, which led him to legal studies investigating how cultural stories shape legal documentation through arbitration. All throughout, Jerry's ardor for culture and human development remained salient. He loved rowing in the lakes of Los Angeles and Vermont, and playing tennis in New York.

His dear colleague, Carla Rinaldi, related that whenever he visited the city of Reggio Emilia in Italy, he stayed in the same hotel in the same room, and anyone who came for him called for “The Professor.” He relished in the flavors, cultures and hues of the market stalls, deeming that the stalls' character channeled the deepest expression of societies. Jerry formed a close relationship with the minister of education, as most of his days in the city were spent in the schools. He observed students and teachers in the classrooms and ateliers, and he had great reflective discussions with teachers and parents. The early childhood community grew to love him and looked forward to his visits, and positively, he was awarded the highest civic honor of honorary citizen, which Jerry regarded as his most treasured of all awards.

Once, returning from the University of Oxford in the United Kingdom, Jerry joined the faculty at The New School in New York in 1980. Around this time, he, along with Daniel Rose and others, co-founded the New York Institute of Humanities. Rose described Jerry as the "Socratic ideal of intellectuals" where he delighted in the oral discourse of the mind with scholars, artists, writers and critics. He remembered one particular evening when Jerry and one other fellow had a prolonged intense debate on the versions of the Greek etymology of the word "symposium" with the whiskey libation in hand to ferment the flare. Jerry was Athenian at heart where he creatively and cognitively reveled in fields crossing psychology, law, anthropology and education. Rose closed with this quote for Jerry from Emerson's Thoreau: “His soul will be welcomed where knowledge, beauty and virtue assemble.”

Jerry's eternal belief that every child possesses all the potential to learn was demonstrated in his passion to learn from, relate to and support others. Besides witnessing his belief evinced in the Reggio Emilio approach to education, Jerry also was a member of the Harlem Education Activities Fund (HEAF), ensuring that children, despite their circumstances, have access to quality education. About this time he met his partner, Eleanor Fox, at 90 at New York University. Fox, the final speaker for the evening, shared that he loved family, he loved mankind, and so, lived ardently awaiting the connection to have every individual.

He was a staunch advocate for social justice and while at NYU, he taught the seminar on criminal justice through literature and the Greek tragedy of Aeschylus' "The Oresteia." He loved literature, especially the poetry from T.S. Eliot, and in particular, "The Love Song of J. Alfred Prufock." And the place he found to be the most beautiful in the world in his final years was the scene from his room in his Manhattan apartment watching the sun rise, and the sun set, on him, and the thousands of books he held close. 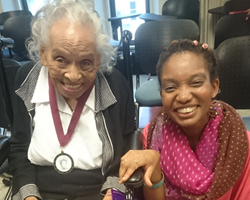 Olivia Hooker is the second scholar. Rosily exuberant at 101, she received the Anne Anastasi Award on Sept. 18, from the Manhattan Psychological Association. But her jubilant outlook was not without experiencing a woefully traumatic event at the tender age of six. Olivia saw her community of Greenwood in Tulsa, Oklahoma, burned to the ground in the race riots of 1921. Her family lost everything, and since that time, she has sought reparations and testified as one of the last living survivors. This experience served as testament to Olivia's tenacity to thrive in circumstances beset with affliction. She was the first African-American woman to serve in the U.S. Coast Guard in 1945. And she became the first of two African-American women to be granted a doctoral degree in psychology at the University of Rochester in 1961. She helped direct the Kennedy Child Study Center in New York City in its prime stages, and she worked with Kenneth Bancroft Clark on many of his research studies. Furthermore, Olivia was one of the founding members of APA's Div. 33 – Intellectual and Developmental Disabilities/Autism Spectrum Disorder (IDD/ASD).

Olivia's joy was palpable throughout this event as her friends, family, and students paid tribute and shared so many stories of her relentless courage couched in love. Apparently, Olivia remained optimistic and became a beacon of light to many of her students, and she accorded her strong faith to her commitment as member of the Trinity United Methodist Church. Her students, friends and family members reiterated that “the most important thing we get from you Olivia is love. Nothing but love, not just for people she knows but everyone.” And towards the end before Olivia savored her slice of cake, she jovially expressed, “Happy are the feet of those who bring good news!”

Soaring with these two stunning scholars helped me to recognize that despite all the negativity that can surround me, I could look forward to … reading a poem, hearing great music, debating with a colleague over wine, children's smiles, adult's smiles and hope. We can have more compassion and patience with ourselves, educate ourselves and do the same with others.

John Minahan, who wrote our feature article on suicide and shame, provides us with examples of significant figures who experienced suicidal ideation and yet lived. There were similarities among these figures that possibly helped them move through each day with hope, and points to the notion that human expression of anguish should not be stigmatized, but can be seen as signaling their enormous propensity to live. We witness significant gains that psychologists/practitioners/scholars/students made with our Div. 1 awards organized by our awards coordinator, Jocelyn-Turner Musa, that starts off this newsletter. Then we see the distinguished number of new fellows of Div. 1 rewarded by our committee chair, Mindy Erchull. In terms of resources, psychology educators provide a manual for graduate students to incorporate teaching as part of their practice.

Reducing stigma (or shame) is never easy for the recipient or the observer, but suggested ways to start are with dialogue and music. We have our members respond to the shootings, and a group of students hold a concert to destigmatize mental disorders. Another way is with education so a number of resources are given. And David Chirko reminds us the danger that can arise if there is constant alienation of those persons who are stigmatized, especially if they fanatically seek support for their beliefs.

Our president, Irene Hanson Frieze, communicates her goals as our president for this year and invites your comments and suggestions. For APA 2017, we also encourage you to submit your proposals by Dec. 1, 2016, to our Program Chair Clare Mehta.

In closing, I believe the key to our division is our interdisciplinary nature that helps us rise above the fray. That has been a key element of our mission since our inception. Our journal, the Review of General Psychology, led by our Editor Gerianne Alexander, demonstrates our devotion to interdisciplinary scholarship in the most direct sense. So, becoming or renewing your membership can be a consideration. I will continue to be a member as I have for the past three years. And with a smile.