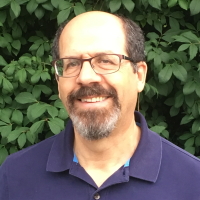 Larry Cieply, PhD
Michigan
PhD in counseling psychology from the University of Miami
Psychologist with the Michigan Department of Corrections

Larry Cieply is approaching his 22nd year working in the Michigan Department of Corrections with severely mentally ill adult male inmates. He often finds himself having to explain to people that psychology work in corrections is "not like TV," but that his works is fun “as long as you can balance maintaining good therapeutic boundaries and look past the criminal to the person.”

Cieply entered the field in the early 1990’s when he worked in a small substance abuse correctional facility in Gainesville, Florida, a rather chaotic "therapeutic community.” Prior to graduating from the University of Miami with his PhD in counseling psychology, he completed his pre-doctoral internship at the Student Counseling Center at California State University, Fresno. He appreciated “the opportunity to intervene with students at a time when they were open for change in their lives.”

After graduation, he realized that he much preferred working with an interdisciplinary team, enjoyed social connections in the workplace, and wanted a job that would provide for his family. Thus, he started a position at a corrections facility that had long before been the Michigan Asylum for the Criminally Insane.

Cieply worked as a member of the interdisciplinary team of psychologists, social workers, recreation therapists and psychiatric providers for 11 years. He now leads that team 22 years later. When asked about he enjoys about his work, Cieply says, “I'm very proud of the skills, creativity and integrity that my team members bring to their work every day, and I see my task as facilitating them in their professional growth.” Aside from his normal work duties, Cieply enjoys supervising MA/MSW interns —“helping them to develop into competent therapists is both challenging and rewarding.”

His current career goals include moving his mental health program towards a Treatment Mall format and to gather additional data related to post-discharge inmates and what programming helped them the most.