From lawyer to psychologist: my personal call to action

Meet one of our members, Danielle Rynczak, JD, PsyD, ABPP.
Cite this
Rynczak, D. (2021, July). From lawyer to psychologist: My personal call to action. The Gavel. http://www.apadivisions.org/division-18/publications/newsletters/gavel/2021/07/danielle-rynczak

In 1934, a young black man named Claude Neal was tortured and lynched in Marianna, Florida. In what has been described as one of the last “spectacle” lynchings in the nation, Mr. Neal was castrated, shot 18 times, and burned with hot irons. He was tied and dragged behind an automobile. Pictures with his body sold for 50 cents, and souvenirs of his fingers and toes were passed around a blood-thirsty crowd. I came to know this story as an aspiring lawyer in the early 2000s when I went to investigate a lesser known murder. I walked past the actual tree where Neal’s body hung (it is still there). I walked up the courthouse steps to investigate why Kayla,* a 15-year-old biracial girl who was next on my wait list, had been sentenced to an adult facility. I later found out, she purposely broke the window at her group home when she was told that she would be returning home, a very unsafe place for her. The judge said he wanted to “teach her a lesson.” Fifteen-year-old Kayla’s lifeless body was found hanging by bedsheets in her single-occupant prison cell.

As the youngest female juvenile to commit suicide in Florida’s prison history at that time, I dedicated a year to investigating the factors that contributed to Kayla’s death. I wanted to know what happened, what mistakes had been made, and most of all, I wanted to make sure that the same mistakes were not repeated. At the end of that year, ethical issues precluded a lawsuit that I had hoped would highlight systemic failures and result in much needed systemic changes in mental health care and suicide precautions in correctional settings. Kayla’s case highlights many personal and systemic failures: overburdened child welfare systems, the often undervalued goal of rehabilitation in the juvenile justice system, abuses of prosecutorial and judicial discretion, and racism. Kayla’s story was never told in a court of law. No news outlet publicized the injustices. No obituary acknowledged her life, and no gravestone marks her death; her body lies in an unmarked grave with other deceased inmates whose bodies were never claimed.

Because my personal experience with Kayla’s story changed my professional path from lawyer to practicing psychologist, I naturally reflected on this story when I was invited to write about myself. While we can read about Mr. Beal’s “spectacle” lynching with outrage and disgust, most social injustices like Kayla’s, are not as known or accessible. There are people, like Kayla, desperately waiting, calling out for help. Are we listening? As correctional and forensic psychologists, we are and will be exposed to some wrongs/injustices—a patient’s personal struggle, a defendant’s interaction with police, a misdiagnosis, an institutional or legal systemic failure—do not be afraid to notice, and acknowledge. Though it will be hard work, find ways to improve such situations. To quote James Baldwin, “Not everything that is faced can be changed, but nothing can be changed until it is faced.” 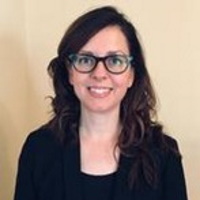 Danielle Rynczak, JD, PsyD, ABPP, started her career as the attorney for the Florida Boxing Commission where she drafted regulations for mixed martial arts until her pro bono work representing children's expressed interests in a variety of cases led her to a career in clinical psychology. She obtained her master’s degree in clinical and community psychology from the University of Illinois at Urbana-Champaign and completed her doctorate in clinical psychology at The Chicago School of Professional Psychology. Rynczak is a licensed clinical psychologist in Illinois and Massachusetts and has been board certified in forensic psychology since 2016. She is an assistant professor of psychiatry at the University of Massachusetts Medical School in the Law and Psychiatry Program, where she is actively involved in diversity, equity, and belonging curriculum development (as the incoming Director of Diversity, Equity, Inclusion, and Belonging for the APA accredited internship program); legal training (as the new Director of Legal Education and Training beginning this summer); conducting forensic evaluations; and teaching and mentoring interns and fellows. Rynczak also holds teaching positions in the medical and law schools at Northwestern University. She enjoys meeting new people in her role as the chair of the Webinar Committee for Div. 18, Criminal Justice Section.