The Diversity Initiative of the Committee of State Leaders was founded in 2000 with the continued support from the Committee for the Advancement of Professional Practice and the Office of Ethnic Minority Affairs (OEMA). The primary goal of the initiative has been to involve more ethnic minority psychologists in membership and leadership positions in the SPTA's through funded participation in the APA Practice Organization's State Leadership Conference (SLC). While the initiative began with a small representation, now an average of 27 to 30 diversity delegates participate in each PLC representing on the average 24 to 25 SPTAs.

In 2011 it was established that funding from OEMA will be exclusively for delegates from diverse racial and ethnic backgrounds. The Practice Directorate’s funding includes all Diversity Delegates who fit under APA’s definition of diversity, which includes race, ethnicity, language, sexual orientation, gender, age, disability, class status, education, and religious/spiritual orientation. State, Provincial and Territorial Associations (SPTAs) that self-fund will determine their own definition of diversity. Candidates’ submissions must identify his/her diversity background.

Since the inception of this initiative, the number of applicants has continued to grow. The initiative has been extremely successful in its goal to develop diversity within governance at the state level and involve ethnic minority psychologists in membership and leadership position in SPTAs. APA CSL—The Growth of a Great Idea: SLC's Diversity Initiative. Monitor, May 2001, Vol 32, No. 5

Below, the Diversity Delegates from the 2013 PLC. 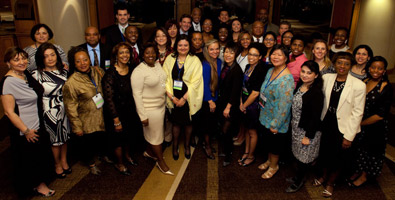 The Diversity Delegate Orientation Manual (PDF, 237KB) contains everything you need to know to attend SLC—from the history of how diversity delegates were created as a part of the diversity initiative to tips for new delegates. Find out about what to do and think about before the conference, mentor-mentee matches and suggestions, useful information about SLC, and other resources.

The Diversity Delegate Recognition Award was created by the CSL Diversity subcommittee to recognize leaders that have promoted and/or made significant contributions to the development of diversity leadership at the SPTAs and or APA levels.

Josephine D. Johnson, PhD, was selected as the 2013 Diversity Delegate Recognition Award winner. Johnson has a longstanding history of making significant contributions to the SLC Diversity Initiative, and Div. 31 is delighted that she was recognized for her outstanding work with the diversity initiative, and with the many years of diversity delegates.

Each year diversity delegates from various states provide reports of their goals and progress (PDF, 234KB) from the previous year and publish their current initiatives and goals. The goal is to promote active participation of the delegates in their respective SPTAs by bringing what they have learned each year at the PLC.

The Diversity Leadership Training Program has been held every two years since 2009 and is the brainchild of Jennifer Kelly, PhD, who created the initiative during her presidency at Div. 31. It is held the day prior to the State Leadership Conference. The workshop is a co-sponsored effort between the APA Commission on Ethnic Minority Recruitment, Retention and Training in Psychology II Task Force (CEMRRAT2 TF), and Div. 31 as one project of the Task Force’s larger “Partnership Development Initiative.” The Diversity Leadership Training Program was created with the goal of increasing ethnic and racial leadership and advocacy representation at the SPTA and APA levels. Jessica Henderson Daniel, PhD, Sandra Shullman, PhD, Melba Vasquez, PhD, and Cathy McDaniels Wilson, PhD, organized and facilitated the workshop. These four esteemed psychologists have leadership development skills as well as an understanding of the challenges that psychologists of color face in becoming leaders in organizations, especially SPTAs. The areas of focus included leadership, negotiating, and mentoring. In the last 6 years, two alumni of the program have been invited to be part of this esteemed faculty, Dinelia Rosa, PhD, and Ruddy Taylor, PhD. Following the workshop, APA president sponsors a wine and cheese reception for the participants at the APA Board Room.

The Diversity Leadership Training Program had always been threatened by the likelihood of not receiving enough funding. It was launched initially with funding provided by the APA CEMRRAT2 Task Force’s Implementation Grants Fund. Kelly developed the concept, which called for the presentation of the workshop every 2 years, and submitted a funding proposal to the task force. It was accepted and approved for funding in partnership with Div. 31. In late 2011, Kelly amazingly was able to secure annual funding from the CEMRRAT2 Task Force which will enable the program to develop further and set goals to increase the number of psychologists of color in leadership roles in SPTAs. The grant Kelly was able to secure for Div. 31 assumes continued administration and identification with Div. 31 for the purpose of ethnic minority leadership development in SPTAs. The CEMRRAT2 Task Force and its projects are staffed by the APA Office of Ethnic Minority Affairs.