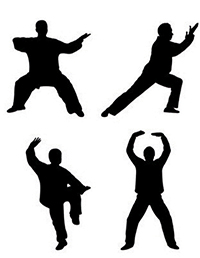 From a neuroscience perspective, embodied mindfulness practices that combine somatic exercise with meditative movements may have unique benefits. “ By moving in a mindful way, there may be an additive effect of training as the two elements of the practice (mindfulness and movement) independently and perhaps synergistically engage common underlying systems” ( Russell & Arcuri, 2015, p. 1). Embodied mindfulness practices may be particularly beneficial for veterans who are at high risk for committing suicide — currently an average of 20 veterans per day. Post-traumatic stress disorder (PTSD) is the most common psychological condition diagnosed among military personnel and contributes to a wide range of other adverse health outcomes including panic attacks, depression, substance abuse, sleep disturbance, family dysfunction and occupational impairment. The martial arts of Aikido and tai chi that are the focus of this article are embodied mindfulness practices that have been used for decades with veterans and active military including by the authors. Researchers suggest that similar benefits are likely to apply to yoga and other embodied mindfulness practices, but they are not addressed in this article.

Historically, meditation and related breathing exercises have been a part of Japanese martial art traditions since the days of the Samurai. Warriors who dealt with life and death everyday embraced the meditation practices of Zen monks to help them calm their mind and body. Both tai chi and Aikido require stilling of the mind while the body is in motion. The training process has many parallels with meditation training. A martial arts student trying to learn an unfamiliar technique is likely to have distracting thoughts, such as, “Which foot goes where?” or “I’m not doing it right.” This is similar to the novice meditator who finds it difficult to stay focused on their breath or mantra. But over time, with practice, both the meditator and the martial arts practitioner improve their ability to recognize a distracting thought and come back to the present. For this reason, embodied mindfulness practices have been incorporated into non-martial arts mindfulness programs such as Jon Kabat-Zinn’s well-researched Mindfulness Based Stress Reduction program. Remaining calm and balanced amidst conflict is a mindfulness skill that is not an automatic response but can be learned through rigorous training in an alternative response to the “fight or flight” reaction. This new learned coping response to stress can then be used to cope with all forms of conflict not just physical.

Prior research has established that “mindfulness-based modalities have shown particular promise in veteran populations dealing with PTSD” (Kopacz & Connery, 2015 p. 64). One vivid example is Rudy Reyes (2009), a Recon Marine who has written a book and been featured in HBO’s Generation Kill and the History Channel’s Apocalypse Man. In these media, he describes how the psychological and spiritual damage he suffered from tours of duty in Iraq and Afghanistan were repaired by the practice of Asian martial arts disciplines.

Researchers have demonstrated that somatic exercise has benefits for the brain and body including reductions in depression, enhanced well-being and improved memory and cognitive processing. Somatic exercise has been used as a form of behavioral activation in treatment of depression to increase engagement in activities that improve mood. Exercise has also been found to reduce age-related brain atrophy, increase blood/nutrient flow to active regions and build new synapses through the release of Brain-Derived Neurotrophic Factor (BDNF). When John Ratey, professor of psychiatry at Harvard Medical School and an internationally recognized researcher on the brain-fitness connection, was asked which sports or activities were the most beneficial for the brain, his answer was martial arts: “Tae kwon do or karate, jujitsu--using your movement while you're learning and focusing and training your movements and then interacting with another person … puts a great strain on the brain, which the brain actually loves” (“Exercise and the Mind”, 2001).

Developing compassion for others is inherent in the practice of Aikido. Ueshiba, the founder of Aikido, stated that “to injure an opponent is to injure yourself. To control aggression without inflicting injury is the Art of Peace” (Stevens, 1992). An Aikidoist learns how to avoid confrontations or clashes with a challenger by accepting, joining and moving with the flow of the challenger’s energy. Blending undercuts resistance because the Aikidoist offers nothing for the challenger to resist.

Another dimension of compassion in Aikido is that both partners need to take care of each other to ensure that the training is safe. Attention to the well-being of one’s partner is the essence of compassion. In contrast, other martial arts include techniques designed to hurt an opponent. Aikido and tai chi can generate compassion for self and others that could be a resource for improving interpersonal skills among veterans who have relational problems.

A Spiritual Practice and Community

Spirituality is “the direct experience of one’s connection and unity with others and the world” (Sperry, 2016, p. 222).Aikido and tai chi can be considered spiritual practices, but they are not religions. Neither require adherence to any person or dogma. They have no specific political, economic, social agenda other than harmonizing conflict to create internal and external harmony.

It is well-documented that many veterans have spiritual struggles related to moral injury and other aspects of their military life. Aikido and tai chi may be particularly helpful for some veterans who are experiencing spiritual struggles where their “old meanings fail to provide comfort and solace, [and] they are left to look for new explanations, values and beliefs” (Kopacz & Connery, 2015, p. 62).

In addition, a protective factor identified in suicide prevention is participation in personally meaningful activities, especially within a context that provides social support. The multiple psychological and somatic health benefits of church membership are well-documented and could apply to being a member of an Aikido or tai chi dojo, including lower likelihood of suicidal ideation, attempts and deaths for which veterans are at high risk.

In Aikido practice, hands are used to connect with a partner rather than to punch or strike them. “In Aikido, as opposed to other martial arts, the skin is being touched. It is not being hit, kicked or punched. ... Aikido involves an almost joyful willingness to be touched, to want to touch” (Rest, 2015, p.72-73). In general, hands are soft, yielding and relaxed. Some tai chi practices, such as push hands, also train staying connected to one’s partner rather than striking them.

Touch has important benefits for humans as primates. Grooming among many primate groups occupies 20 percent of time spent together, much more than is necessary for hygienic needs such as removing lice. Studies have shown that people in the United States touch each other much less than people in many other cultures . Lack of touch is associated with depression, eating disorders, aggression and self-injurious behaviors, while touch has a positive effect on neuronal growth, brain waves, breathing and heart rate and decreases stress and anxiety.

During my (DL) 14 years as a psychologist at the San Francisco Veterans Medical Center, I often used Aikido techniques in PTSD groups as well as in Coping with HIV and AIDS, Coping with Chronic Illness, Coping with Chronic Pain and Substance Abuse groups. When I described this training as learning to “roll with the punches,” many veterans with prior martial arts experience resonated with this metaphor.

Aikido and tai chi are martial arts that are also embodied mindfulness practices, compassion practices and a spiritual path while also providing somatic exercise and opportunities for social touch. Embodied mindfulness practices derived from martial arts could be particularly appealing to veterans coming from a Warrior Ethos tradition who are used to coordinating closely with others and rigorous somatic training.

The references cited in this article, along with other supporting citations and descriptions of several programs at VA Medical Centers that are currently using embodied mindfulness are provided in: Lukoff, D., & Strozzi-Heckler, R. (2017). Aikido: A martial art with mindfulness, physical, relational and spiritual benefits for Veterans. Spirituality in Clinical Practice, 4, 81-91.

David Lukoff is a professor emeritus of psychology at Sofia University in Palo Alto, Calif., and a licensed psychologist in California. He has been an active researcher and proponent of spiritual competency in psychology, authoring 80 articles and chapters on spiritual issues in mental health services and co-authored the DSM-IV and DSM-5 category of Religious or Spiritual Problem.

Richard Strozzi Heckler has a PhD in psychology and a seventh-degree black belt in Aikido. He is the founder of Strozzi Institute-The Center of Embodied Leadership and Two Rock Dojo. He is the author of seven books, including  In Search of the Warrior Spirit: Teaching Awareness Disciplines to the Military and T he Leadership Dojo.