Julia Falk, PhD, shares conclusions of research in which participants attached many different meanings to overall course experience, both to the process of finding and sharing stories and to the content of the stories themselves [which] corresponded with existential concerns: being and becoming, awareness, relationship, meaning and responsibility. 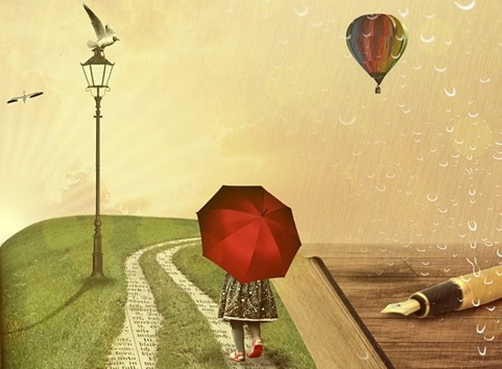 I came to the practice of mindfulness because in every inactive moment, my mind was occupied by an endlessly repeating narrative about a particularly distressing story from my life. As the continual act of drawing the mind non-judgmentally back to the present moment strengthened the mental muscle for doing so, I was finally able to feel some space between myself and the suffering. That miniscule bit of distance first enabled me to perceive the storying nature of the mind. Lacking that form of awareness, I was caught inside the drama of my own stories, as many people are. I went on over several years of training and practice to become a teacher of Mindfulness Based Stress Reduction (MBSR), where I witnessed similar dynamics in my participants. My doctoral research, then, centered around the development of a curriculum that engaged narrative processes to foster personal growth through the telling of important stories from across the lifespan in a group setting (Falk, 2018). By design, mindfulness was meant to play a supporting role in the life story curriculum. Curiously, the majority of participants who enrolled in the course were graduates of MBSR, so that establishing a mindfulness-based foundation for the classes was not difficult in this instance.

Each class of the eight-week Life Story Course began with a segment for mindfulness training. The course invited stories that shaped or challenged identity, so I wanted to support participants in growing skills for both self-soothing and the ability to hold stories of difficulty without harmful reactivity. A number of studies have been implemented over the past two decades to determine the constituents of mindfulness (Baer et al., 2008; Gu, Strauss, Bond, & Cavanaugh, 2015). Among them, the facet of observing denotes an enhanced capacity for noticing internal and external experience, and the facet of describing denotes an ability to use words in the depiction of subtle internal experience (Baer et al., 2008; McCown, Reibel, & Micozzi, 2010).

Meditation with awareness of the breath was the first step — cultivating concentration and a sense of refuge in the breath. In the early weeks, meditative periods emphasized perception of bodily sensations to foster awareness of the embodied nature of self-stories. This was intended to increase sensitivity to signs in the body that a particular story held importance to the self. Using narrative inquiry to elicit rich descriptions of participant experience as they moved through the process of identifying and relating stories, I learned that the storytellers were often initially stymied about what stories to choose each week. They nearly all maintained this uncertainty until the day before class, and some developed a practice of sitting quietly, which allowed an important story to surface. One said, “I turned on the mindfulness talk [guided meditation] from you, and honestly it just had an effect I hopefully expected but was surprised … and could just go ahead and start just putting down thoughts, rather than being scattered as usual.”

Additionally, drawing the mind back to the chosen focus over and over again fosters an awareness of patterns in the thoughts that are being released. After a few weeks of consistent practice, additional facets of mindfulness may begin to emerge, including acting with awareness, which is attention to present-moment experience rather than acting automatically while focused elsewhere, and nonjudging of inner experience, or noticing thoughts and feelings without self-criticism (Baer et al., 2008; McCown et al., 2010). Even the experience of having repetitive or anxious thoughts grew less threatening for some participants: “It was frightening to first realize how the brain keeps thinking. I felt like I was in prison when I first realized it, but now it’s just what we all do … just because it’s a thought doesn’t mean it’s true.” This quality of nonjudgment was applied between participants as well as within them, which proved to be critically important to the value of the course, as the commonality of difficulty became increasingly apparent.

After the fourth week of the course, stories were elicited from middle and older age and participants were encouraged to consider emerging threads or meanings that linked the stories from different developmental periods. The emphasis in meditation shifted from the cultivation of concentration and relaxation to the observation of thoughts and emotions, using the practice of open or choiceless awareness. “Non-reactivity to inner experience is the tendency to allow thoughts and feelings to come and go, without getting caught up in or carried away by them” (Baer et al., 2008, p. 330). In the fifth and sixth weeks, when trust was firmly established in the group, participants began to reveal the experiences that had most impacted them. Many of these stories depicted deep wounding. A mindfulness perspective might counsel that non-reactivity would enable people to dwell with these emerging stories with a degree of equanimity. The existential/humanistic literature also speaks to this idea, as when Rollo May (1981) spoke of the pause between stimulus and response that interrupts patterns of reactivity, creating a space for the development of a creative answer. This appeared in the transcripts in a somewhat cognitive guise: “I see that as learning to separate the emotion and the thought and pulling them kind of apart. … I think I’m going to practice that … like when an older problem comes up and I respond inwardly with anger and resentment.” Practice in open awareness (and related techniques such as vipassana, or insight meditation) develops familiarity with facing into the embodied experience of difficult moments, allowing thoughts and feelings to rise and pass and extending self-compassion. I watched for the quality of connected detachment that some researchers have noted as a prerequisite for insight and second-order change (Hanna, Giordano, Dupuy, & Puhakka, 1995; Linley, 2003), though this may be an attribute characterized by the absence of obvious behavior rather than its presence. Participants described emotional states while writing their stories at home that did sound reactive, but in the re-telling, they were able to bring enough detachment and organization to the narration to support the derivation of meaning from their experience.

The participants attached many different meanings to the overall course experience, both to the process of finding and sharing stories and to the content of the stories themselves. To associate the many statements of meaning to the possible presence of personal growth, I established indicators based on literature review in that area, and these indicators corresponded with existential concerns: being and becoming, awareness, relationship, meaning and responsibility. As fostering growth was the essential purpose of the Life Story Course, it was not surprising that the largest proportion of meaning statements fell under the category of being and becoming. Telling and evaluating stories enabled participants to recognize how they had changed over time while also remaining the same person. Some of the most important changes they recognized in themselves related to an increasing tolerance for the differences of others and letting go of being judgmental. They were more accepting of uncertainty in life, as when one said, “Two things … came out of me over this project. One … identifying that change in my life. The other … neither one of them are solved. Maybe neither of them will ever get solved. You just make that a part of life.” This tolerance for differences and ambiguities can be related to the recognition brought by mindfulness to the ways in which people and contexts are always changing.

Indicators of personal growth that fell into the category of awareness comprised the next greatest frequency. Insight, a new understanding of the meaning or causes of a remembered event, was the most frequently noted metacognitive event. Some of these insights were new and many were being retold from past experience. There were also stories of spiritual or symbolic experience that had been life-changing. For example, participants told of compelling or prescient dreams which seemed to be messages from angels or God. Although mindfulness training is currently viewed mostly from a secular perspective, a sense of connectivity to what is beyond the self has long been associated with longer-term meditative practice.

Hendlin (2018) recently described cognitive distortions that can be observed in some mindfulness practitioners, including a tendency to dismiss the value of past experience; not connecting it to the present in a meaningful way. Likewise, one might hold oneself exclusively in the present in order to avoid the cultivation of a future story. In the life story project, integrating mindfulness with structured life review seemed to encourage emotional processing and the assignment of positive meaning to difficult past experience. It also introduced consideration of possible future stories. I had planned to teach mindfulness as a means of surfacing deeper stories and providing a safe space for holding them. By the end of the project, it appeared to be more integrated with meaning making processes overall than I had anticipated. In that space between stimulus and response, between memory and suffering, the potential may be born for accommodation, reappraisal, positive processing and the invoking of spirituality.

Students have often asked me how to access further mindfulness training after their initial experience. I’ve come to think that the mindful consideration of life stories doesn’t represent something apart and different from their basic training, but a deepening and broadening of it that makes the practices applicable across life.

Julia Falk, PhD, recently completed the doctoral program in existential, humanistic and transpersonal psychology at Saybrook University. She has been teaching mindfulness to people with chronic conditions, depression and anxiety for eight years and is certified to teach MBSR by the Center for Mindfulness at the University of Massachusetts Medical School. Retired from a career in nursing, Julia plans to continue the integrative activity of teaching mindfulness, therapeutic yoga and the mindful exploration of life stories. She lives near Gettysburg, Penn., where she enjoys (slow) running on the battlefield and other outdoor pursuits.