The Human Science Special Interest Group does not hold formal meetings, but exists as a way of reminding ourselves that we as a division should continue to keep ourselves mindful of those areas to which we can make an important contribution. This interest area is concerned with lobbying for human science interests within APA at large and promotes convention programming as well as publication of human science research.

This “section” of Division 32 originated at the 1994 winter retreat in Santa Fe, when the executive committee divided into “interest groups” to have focused discussions. Like the more recently formed Transpersonal Section, as well as the earlier formed sections for Humanistic Psychotherapy and Humanistic Education and Research (from which the current section “broke off” at the Santa Fe retreat), the Human Science Section does not hold formal meetings, but rather exists as a way of reminding ourselves that we as a division should continue to keep ourselves mindful of those areas to which we can make an important contribution.

My first real assignment as “human science chair” came in 1995 when Ruth Heber (the President of Div. 32) appointed me Liaison to the Science Directorate for Div. 32, in response to the Directorate’s new liaison program, intended to give all divisions a voice in the science directorate programming. I went to Washington in the fall of 1995 to lobby for humanistic psychologists to be represented in the following year’s Science Weekend at the annual convention in Toronto. Because of the disruption of “business as usual” that resulted from this one-time inclusion of all divisions in the planning of science weekend, the liaison program was discontinued the following year! But this has not stopped us from making our concerns known to the Science Directorate. The latter, which is supposed to serve all members and divisions of the APA, has been dominated by the interests of a very few divisions, and it was these same divisions who apparently protested our input into Science Weekend 1996. We responded by writing a letter to the Directorate, claiming that they were biased toward experimental research and suggesting that they change the name of Science Weekend to Experimental Research Weekend, in order to allow for another “weekend” – a “qualitative research weekend” – to be presented under the auspices of the Science Directorate. This would finally mean that the Science Directorate was serving all of our interests instead of the interests of a minority of divisions.

The Directorate barely paid lip service to our earnest efforts to communicate with them, and they made it clear that they were not really interested in supporting our research interests. Hence one of our current concerns is how to make the general membership of APA aware of this bias within the Science Directorate.

Beyond lobbying for our interests within the APA at large, the human science section of Division 32 promotes convention programming as well as publication of “human science research”. We try to make our membership aware that without published research, we will never make our presence known in psychology textbooks. And without a presence of humanistic psychology in professional publications (including introductory textbooks), we will remain a marginalized division within the APA, and might be condemning ourselves in the future to being but a footnote in the pages of history of psychology textbooks.

To this end, I am in the process of trying to merge Methods: A Journal for Human Science (for which I have served as Editor since 1989) with The Humanistic Psychologist. Methods would survive as a fourth yearly issue of THP. The idea is to keep our membership mindful of the importance of conducting and publishing research in humanistic psychology.

Readers of this newsletter might reflect for a moment and ask themselves how we might work together to carry out investigations of human psychological life that highlight phenomenological as well as transpersonal dimensions of psyche and to put into print our vision of psychology. If you have ideas, articles, unpublished research that you would be interested in submitting to me. 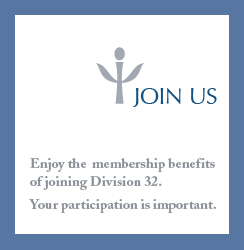