The Div. 36 Executive Committee has appointed an Early Career Professionals Task Force that represents the unique interests, needs and concerns of psychologists of religion and spirituality who are early career professionals (ECPs) — that is, who have received their doctoral degree within the past 10 years. The Div. 36 ECP Task Force's mission is:

This task force is comprised of eight ECPs who are Div. 36 members within the broad psychology of religion and spirituality community:

We would love to hear from you, regarding any:
(a) ideas or comments you have;
(b) issues or concerns you would like us to address or to convey to the Div. 36 Executive Committee; or
(c) interest you have in available programming, leadership or publication opportunities. 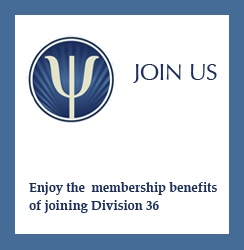