Div. 49 is an organization that welcomes all psychologists interested in the study and application of group dynamics. The purpose of Div. 49 (Society of Group Psychology and Group Psychotherapy) shall be to promote the development and advancement of the field of group psychology and the modality of group psychotherapy through research, teaching and education, and clinical practice and to further the general objectives of the APA.

In the early 1980s, special sections of people interested in group psychotherapy formed in several divisions of the APA. This occurred first in Div. 29 (Psychotherapy), and then in Divs. 12 (Clinical Psychology) & 17 (Counseling Psychology). An Interdisciplinary Council on Group Psychotherapy was created in 1989 to coordinate the activities (e.g., workshops and convention programs) of these special sections.  As that group developed, its members realized the value of creating a new APA division devoted entirely to group psychology and group psychotherapy.

Creating the new division was not easy; several obstacles had to be overcome. These obstacles included identifying the requisite number (over 600) of potential members, and navigating the political currents within APA at that time. But thanks to the efforts of Art Teicher, PhD, and others, Div. 49 was approved by APA's Council of Representatives in February 1991. Later that year, the society offered its first official program of convention activities in San Francisco.

Much has happened since then, so we urge you to read a paper by Michael Andronico, PhD, that recounts the history of Div. 49 in much more detail. That paper appears in a book entitled Unification Through Division: Histories of the Divisions of the APA (Vol. 3), edited by Donald Drewsbury, PhD, and published by APA. It makes for fascinating reading.

Join Div. 49 and become a part of the society's history.

Div. 49 provides a publication to members: 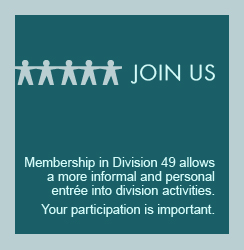