The Society of Group Psychology and Group Psychotherapy mourns the passing of our colleague, J. Richard Hackman, PhD, a leading expert on teams and performance-oriented groups in organizations. Dr. Hackman succumbed Jan. 8, 2013, in Boston, from complications of lung cancer. 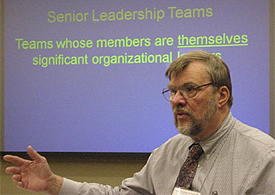 John Richard Hackman was born in Joliet, Ill., on June 14, 1940. He received his bachelor’s degree in mathematics and minors in psychology and physics from MacMurray College and his master’s and PhD degrees from the University of Illinois. The Illinois program was emerging, at that time, as the leading research center for the study of groups as social, task-performance systems, with faculty and students joining together to examine the determinants of group productivity, decision making, creativity, and systems-level processes in groups and organizations. Joseph McGrath chaired Richard’s dissertation project (“Effects of Task Characteristics on Group Products”), completed in 1966. Dr. Hackman, upon graduation, took a position on the faculty of administrative sciences and psychology at Yale University, where he remained for 20 years. In 1986 he moved to the Psychology Department and the Business School at Harvard University.

Dr. Hackman, as a leading figure in the Illinois school of group processes, was fascinated by groups that make things, produce products, and formulate decisions. He pursued his analysis of groups, teams, and organizations with great vigor and discernment. For example, in 1975, with Charles G. Morris, he published his standard-setting systems theory of group performance, clearly defining the input-output-process model of performance that continues to guide the study of group productivity to this day. His edited 1990 book Groups That Work (and Those That Don’t) drew together case studies of 27 different work-focused groups that sought to examine both Memorial the nomothetic generalities that could account for the performance of such starkly varying groups, but also recognized the unique aspects of each one. (The title was originally just Groups that Work, but as the project reached fruition Richard realized that too many of the groups featured in the book did not really deserve to be so categorized.) His authority matrix model of teams organized the myriad types of teams working in organizational settings by taking into consideration their level of autonomy and the leader’s responsibility, identifying manager-led, self-managing, self-designing, and self-governing teams. His many books on groups and teams provide one insight after another into the work of groups and include Behavior in Organizations (with Porter & Lawler), Work Redesign (with Oldham), Leading Teams: Setting the Stage for Great Performances, Senior Leadership Teams: What it Takes to Make Them Great (with Wageman, Nunes, & Burruss), and Collaborative Intelligence: Using Teams to Solve Hard Problems. Richard also wrote, with Nancy Katz, the most recent summary of group and team performance for the 5th edition of the Handbook of Social Psychology.

Throughout his career Dr. Hackman continually underscored the impact of groups on people’s lives. His work stressed production and efficiency, but he believed the group’s performance should never come at the cost of members’ adjustment and well-being. He explicitly stated that the group that makes excellent decisions, generates high-quality products, or organizes its members to work at maximum efficiency is not a successful group if members suffer, at a personal level, from their membership in the group. As he explains in his award winning Leading Teams (recipient of Terry Book Award from the Academy of Management), a successful group experience must contribute “positively to the learning and personal well-being of individual team members” (p. 28). Ever a multi-level thinker, he believed that the group, too, must reap some benefit, for “the social processes the team uses in carrying out the work” should “enhance members’ capability to work together independently in the future” (p. 27). Perhaps for that reason, Dr. Hackman did not just study groups: He also joined them, and sought to help each of his groups reach its fullest potential. He joined many performing musical groups and ensembles throughout his life and served as a leader and member of a wide variety of working groups. He was, for example, the chair of the Institutional Review Board at Harvard and served on that university’s Standing Committee on Information Technology of the Faculty of Arts and Sciences. He also held positions on the boards of such organizations as the Center for Creative Leadership, the New England Cooperative Training Institute, and the National Intelligence, and MacMurray College. In all his books he acknowledges the contributions of all these groups to his work, but in particular—the support and guidance of his family.

Dr. Hackman was recognized throughout his life for his many contributions to the psychology of groups. A sampling of his accolades includes the Distinguished Scientific Contribution Award of the APA’s Div. 14, Society for Industrial and Organizational Psychology; the Mendelsohn Excellence in Mentoring Award from Harvard Graduate School; the Distinguished Educator Award, the Distinguished Scholar Award and the Lifetime Achievement award in Organizational Behavior from the Academy of Management; the Joseph E. McGrath Award for Lifetime Achievement in the Study of Groups; the American Psychological Foundation’s Gold Medal; and the James McKeen Cattell Fellow Award from the Association for Psychological Science for outstanding lifetime contributions to applied psychology. He was recognized by the Society of Group Psychology and Group Psychotherapy in 2008 when he was named the Arthur Teicher Group Psychologist of the Year.

Dr. Hackman observed, questioned, critiqued, examined, and analyzed groups for 50 years, and his conceptual and empirical contributions to the field were profound. Always balancing theory with practical application, empirical support against in-depth conceptual analysis, laboratory research with field studies of working groups, and a group-level view with individualistic and macro-level perspectives, Dr. Hackman’s contributions to our field were profound and far-reaching. We are inestimably poorer for his passing.