Social learning as a driver of early development

G. Stanley Hall Award for Distinguished Contribution to Developmental Psychology Awardee Andrew N. Meltzoff tells about his early and current research and his contribution to developmental psychology.
Cite this

I am delighted to receive this APA award and am especially pleased to be on the same award list as Jerome Bruner (1975 awardee), who was my graduate advisor. 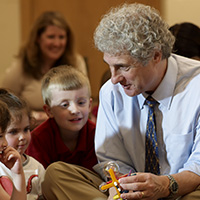 The launchpad for my work was our 1977 paper in Science on neonatal imitation. Working with neonates impressed upon me that babies are born socially attuned to others. Newborns bring perceptual biases and social capacities to their first interactions with people. Most prominent and unexpected among these is the capacity to recognize the biological movements they see others make as like the movements they feel themselves make (Meltzoff & Moore, 1997). This elementary linkage between action perception and production provides infants with a connection to others. I have proposed that infants recognize the bodies and actions of other people as being “Like-Me” (Meltzoff, 2007, 2013), and have theorized that the early detection of self-other equivalences is a building block for later forms of social cognition (Barragan, Brooks, & Meltzoff, 2020; Meltzoff, 1995; Meltzoff & Brooks, 2008).

To further our study of self-other correspondence, my colleagues and I turned to neuroimaging techniques. We examined infants’ neural representation of the body and showed that some of the same brain regions that respond to direct tactile stimulation of the infant’s body also are activated when infants observe another person being touched (Meltzoff et al., 2018). These and other experiments are beginning to shed light on the neural processes involved in the basic feelings of interpersonal connectedness between infants and adults (Marshall & Meltzoff, 2015).

The hyper-sociality of young children supports learning but it comes at a cost. Children not only observe and imitate our positive behaviors, they also “catch” our darker tendencies, our prejudices, and stereotypes. Using new tools to measure implicit stereotypes, we found that children absorb pervasive societal stereotypes at surprisingly young ages. As early as second grade both boys and girls indicate that math is for boys, despite girls doing just as well on math tests at school (Cvencek, Meltzoff, & Greenwald, 2011). Apparently, children believe that societal stereotypes that apply to other people “like-me” also apply to the self.

We recently investigated how children acquire racial biases and prejudices, and tested whether preschoolers could “catch” novel prejudices by observing the behaviors of others. We found that children who saw an adult displaying nonverbal bias in favor of one individual over another subsequently preferred, imitated, and behaved more prosocially toward, the target of these positive nonverbal signals (Skinner, Olson, & Meltzoff, 2019). Children also generalized such biases toward others who looked like the target. We conclude that generalized social group biases can spread to children based on their observations of how adults treat others.

Forty years ago, psychologists chiefly studied infants’ thoughts about inanimate objects. Today it is clear that infants are social, and captivated by people (Meltzoff, Kuhl, Movellan, & Sejnowski, 2009). It is thrilling to be a developmental psychologist in the 21st century. Modern techniques allow us to investigate longstanding questions about the development of the social mind. And our subjects never disappoint.